We are creating a better environment

Written by Višnja Ljubičić, Ombudsperson for Gender Equality of the Republic of Croatia

Gender equality is one of the fundamental values of the constitutional order of the Republic of Croatia.

On October 28th 2011, the Croatian Parliament appointed me as the new Ombudswoman for Gender Equality. During the EU accession process in Croatia I was a member of Croatian delegation on conferences and in work groups of European Commission OESS, UN, ECRI, TAIEX and responsible for the Protocol on Procedures in Hate Crime Cases within completion of measures in regards to Chapter 23. I was also a coordinator and lecturer in: “Anti-discrimination“ and „Gender Equality“ on screening-bilateral meetings of the Croatian Government and European Commission for Chapter 19 – Social policy and employment and a coordinator of the Working Group for drafting VI, VII and VIII report of the Republic of Croatia on implementation of UN Convention on Elimination of all forms of Racial discrimination/CERD.

In 2008, Croatian Parliament adopted a new Gender Equality Act whereupon this institution started to recognize the importance of gender equality and the problem of gender imbalance in economic decision-making. Before that, the central focus was only on political participation of women.

In that respect, during 2013 we succeeded to acquire 250.000 EUR from the EU Progress Programme for the project on economic decision-making „Dismantling the Glass Labyrinth – Equal opportunity Access to Economic Decision-making in Croatia“. Two years later, in 2015 as part of the EU Rights Equality and Citizenship Programme we acquired a new grant, 350.000 EUR for the project on equal economic independence of women and men „In Pursuit of Full Equality between Men and Women: Reconciliation of Private and Family Life“.

Our first project, “Dismantling the Glass Labyrinth – Equal opportunity Access to Economic Decision-making in Croatia” was the response to social context which is rather unfavorable to women’s participation in economic decision-making in Croatia. One of the most significant tasks was to construct The Database of Businesswomen in Croatia – a database of women qualified for top-level decision-making positions, the first of its kind in the region. We have had a great response from a number of businesses and the database with the first members will be publicly presented in March 2016. With this database, we have made a powerful source of information for Croatian employers and employers from the surrounding region looking for women candidates for top-level positions.

Over the last two decades, Croatia has developed an adequate legal framework offering protection against sex/gender related discrimination in the workplace modelled on the EU gender acquis. The notion that women are primarily responsible for a family, particularly for childcare, and that their professional careers ought to be “adjusted” to accommodate this role, is most likely the most dominant example of discrimination in Croatian society.

Accordingly, our new project includes a set of awareness raising and training activities designed to increase the capacity of the local governments to plan, budget and promote policies increasing support to women and men pursuing more effective balance between their professional and private lives. We are very proud about the new target – the student population, with a focus on high school students.  As another innovative feature, the project uses art as an effective form of communication with this particular social group. The project will develop dramaturgical content critically addressing gender stereotypes which facilitate inequality within the family, particularly the issue of male absence from the social task of child care, and use it for performances across high schools in Croatia. Two prominent art institutions will have an active task in developing dramaturgical content dealing with the issue of social stereotypes related to the role of women and men within a family. There are several long term benefits of this project: 1) auditing practices developed for public sector employment can be used across the EU market and in the Balkan Region 2) the interactive play developed within the project can be translated and performed in any language and experiences gained through the process of developing this artistic form of awareness raising could be transferred to other European countries 3) all activities developed within the project can be used in the countries of the Balkan region due to shared history and similar social arrangements in family life.

Today, we are very satisfied with the visibility of the first project, the conducted activities and the achievements. We may therefore conclude that we have made significant progress in addressing the discrimination of women in business workplace thanks to the recognition of EU of the importance of these projects and providing financial means to carry them out. With a new project that consists of a significant number of innovative activities, numerous publications and video materials, we are sure that this project’s results will also have a beneficial long-term impact.

Promotional video about first project was daily broadcasted on Croatian national public television (HRT) and RTL Television. The video with english subtitles can be found here. 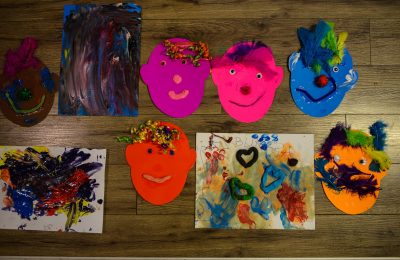 Workshop with children with autism at the EUICC 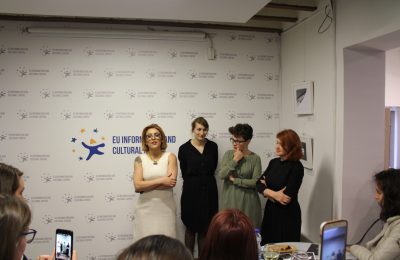 The opening of the exhibition ‘Poetics of Space’ at the EUICC 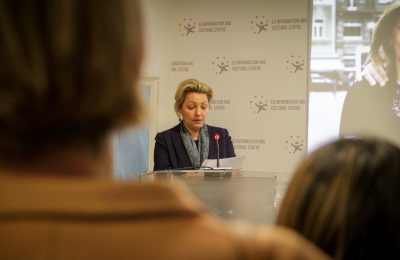