The EU Information and Cultural Centre in Pristina hosted the Croatian Ambassador, Ms. Marija Kapitanovic, as a speaker in the latest of Meet the Ambassador series of events with EU member state ambassadors in Kosovo. The main focus of the discussion was the Croatian experience in the EU integration process as well as the Croatian policy towards Western Balkans.

Ambassador Kapitanović spoke of Croatia and the traditional relations between Croatia and Kosovo including cultural cooperation between the two countries. Among others, the Ambassador stressed the importance of gender equality as a prerequisite for democratic development of the society.

The Croatian ambassador described the Croatian experience in terms of transition and the road to accession in the EU, particularly the process of implementation of the Stabilisation and Association Agreement and its challenges drawing a parallel between the two countries. She described it as a type of switching to a liberal economy and the need for state administration to adapt to a number of rigorous standards in various areas of development. For instance, in agriculture and shipyard industry, Croatia had to adapt to new rules prescribed by the EU. Kapitanović described the SAA process as painful sometimes because such decisions have social implications, including job cuts and application of new skills for the employees. In regard to the rule of law, in 2015 Croatia was facing a backlog of legal cases in the judiciary and this had to be addressed vigorously and this implies a change in mentality and shaking of equilibriums, continued Ambassador Kapitanović.

Regarding gender equality and women representation the ambassador emphasized the importance of national consensus. “More than just fulfilling the quota it is important that women engagement in the society and public life is content-based“, said Kapitanović.

In lieu of the month of Equality promoted by the centres, the EUICC in North Mitrovica screened the French documentary Des Femmes et Des Hommes (Women and Men). The film gives voice to female activists from different cultures and upbringing by tackling the issue of gender equality and how it is perceived in various cultures around the world. Various women and their testimonies depict their views on women’s role in the society.

The director, Frédérique Bedos, investigates the discrepancies and insufficient participation of women in decision-making policies through a series of interviews with women worldwide. Reaching across continents and countries, the film gives a clear insight into the omnipresent discrimination against women which hinders social and economic progress all over the world, sending out a clear message of equality and social progress. The screening followed by a discussion on female rights with Srđan Simonović from the Advocacy Center for Democratic Culture. 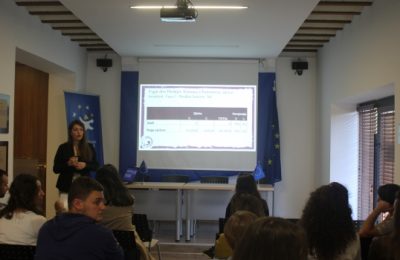 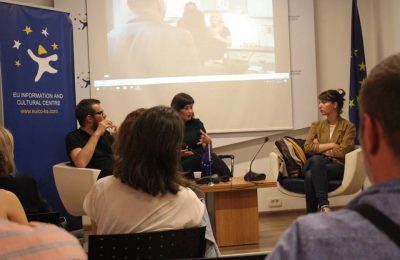 The month of cultural events and activities at the EUICCs