Understanding SAA and deconstructing its meaning to the public

The Stabilisation and Association Agreement (SAA) between the European Union (EU) and Kosovo entered into force in April 2016. This is the first contractual relationship and an important step for Kosovo along their path to the EU. Through this agreement, a process for supporting real reform has been agreed upon, which will affect the lives of Kosovo citizens.

As a step towards enhancing the awareness process on SAA and its understanding, the EU Information and Cultural Centre in Pristina organized a masterclass with Jeton Karaqica, director of Economic Criteria and Internal Market Department at the Ministry for European Integration and member of subcommittee on SAA. Karaqica presented and elaborated in detail the main aspects of the SAA and its meaning, such as its content and key aspects and components.

The SAA represents a comprehensive agreement that provides a framework for political dialogue and covers cooperation in a wide variety of sectors, including justice and home affairs, trade, education, employment, energy, environment and a range of other policy areas. The first inaugural meeting of the SAA Council took place in late 2016 along the first cycle of subcommittee meetings which is ongoing. To guide reforms under the implementation of the SAA, Commission and Kosovo started work on a European Reform Agenda (ERA) for Kosovo, which outlines priority actions in the fields of good governance and the rule of law, competitiveness and investment climate, as well as employment and education.

Some of the positive and concrete measure that the SAA brings for Kosovo is promotion of the branding of its products. The same product with a same package as sold in the country should be sold the same in other European states, as this helps in preservation of product identity e.g. the example of Kosovo wine in Germany.

Among others Karaqica spoke of political-institutional aspect of the SAA such as judiciary independent of political influence, freedom of speech, fundamental human rights, institutional stability, free elections, professional administration based upon the criteria of meritocracy etc. as prerequisites for implementation of the SAA. The implementation of SAA, however, implies significant fiscal and legal implications which are not easy on our national budget and require certain sacrifices, continued Karaqica.

The crucial component of this agreement remains the free trade whereas the agreement aims to establish a free trade zone within future ten years, between Kosovo and the EU, by lifting of customs tax and application of rules of origin for the exported products (Rules of origin are the criteria needed to determine the national source of a product and their importance is derived from the fact that duties and restrictions in several cases depend upon the source of imports.)

The regional cooperation is the underlining prerequisite deriving from the SAA duties and obligations and presents a key element for its successful implementation, Karaqica noted. The EU wants the Balkan countries to firstly resolve their disputes and issues internally prior to joining the EU community, hence the component of regional cooperation is given a great importance during the entire process.

The students in the audience were mostly interested to know about the benefits to be gained from the SAA by citizens of Kosovo especially in regard to education and enhancement of competition for Kosovo products in the EU market. 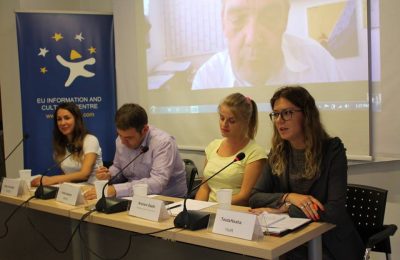 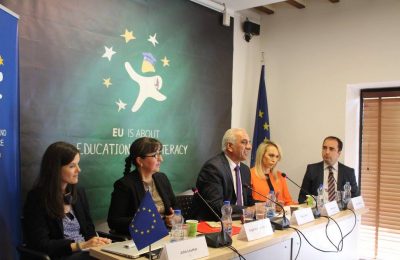 Vocational Education and Training in Kosovo